Yea! No kidding, I found that out last night. Your never to old to learn a new trick!

As I mentioned in the other post, we had a possible Warm Showers.com Turing cyclist coming through who wanted to stop in for the night. He did.

By the time I got home yesterday he was only 3 miles from the house. He comes down the driveway and I am all pumped expecting to see some high end touring bike with the top of the line bags and all kinda neat shit!

Pete, that's his name. Well Pete is 29 years old and lives in West Palm Beach FL. He works at a summer camp for kids up in West Virginia every year and goes to school in Florida the rest of the year. This is his first tour and he's been on the road for 2 weeks. 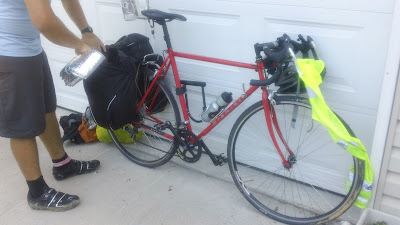 See that bike? $70 bucks Craigslist !!! About a buck fifty for his bags! He had a hammock with a bug screen he uses when he camps. A few clothes and his little bit of toiletries. The very basics.....And it works!! Point is, it don't take much!!! 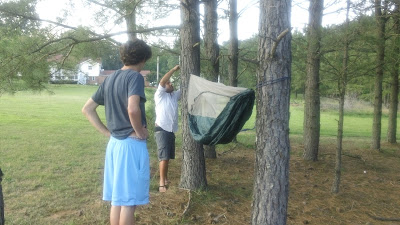 Here we are, he was showing Cody and I how the hammock works! That was neat, of course we had to get in it! Point is anybody can do a bicycle for next to nothing! This guy is traveling around and seeing all kinda stuff. All on a craigslist special!

He put a new cassette on the back with bigger sprockets for the hills and that was the only modification he did. Last fall he got interested in touring and started getting his stuff together. With the plans to ride to the camp this year.

He allowed 3 weeks to do it and is right on schedule. Point is if he can do it so can I. His main navigation is his iPhone and he has been trying to stay at fire departments as much as he can. So far his plan is working out.

I asked him where he planned to stay tonight and he replied "I don't know I will start looking when I get above Salisbury". I could get used to that.......