OK, for the weekend. Saturday the wife went shopping and we went riding. WE as in Cody and I! Chase was over at the Pope's house playing with Noah, and Cody wanted to ride.


This would be the first ride on the road bike. It wasn't a long ride but it sure was nice to have him along! We even stopped at a store, I talked him into it. Just because I want it to take just a little longer. He didn't know it, but that's why I stopped.
We only rode for 17 miles but that was all his knee really needed. I was gonna keep going when we got home but I was already home. So stay I did. 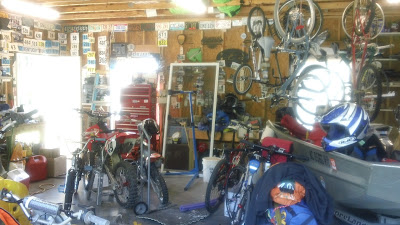 Since Karen wasn't home I decided to work on the garage. From the picture it doesn't look like I got much done But I promise I have made a big dent in the mess. I put off cleaning it so long it was out of control! 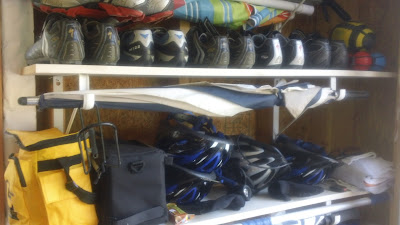 I even made a shelf just for riding helmets and shoes. My lights are in the yellow bag.

Sunday came and after church and lunch I headed out on the road bike. I needed this ride, after a short ride Saturday and trying to kill myself running last week I was looking forward to a long ride.

I went out and right away I noticed the wind was gonna be tuff! I figured if I just adjust my route I can put it to my back. NOT!!!!! It seemed like the direction was irrelevant. I had the wind in my face all afternoon! 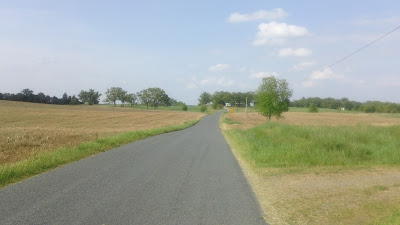 I went out Olive Branch Rd to Olive Branch out on Hwy 218. Then went out the road with no lines (you know your in the country) it turns into dirt about 3 miles later. Then you are entering Anson County. About 3 miles of that I finally found pavement again. 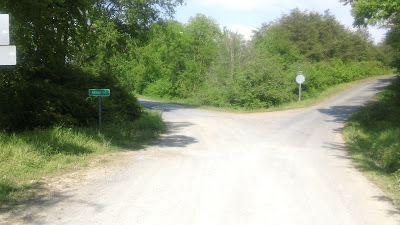 I like this area, there is no traffic and it was nice day. I stopped and took a few pictures here and there, after 40 miles I was back at the house. Including picture stops I was home in 2 and half hours.
Posted by ritchie at 9:55 AM