Time for what? Time to ride!!!! For the last 2 years all I have done is ride the bicycles. We haven't been to the dirt bike track in awhile. Much less the street bikes.

Yea that's right I am gonna let my 16 year old kid ride a street bike. He can handle it, it's my call get over it!

So I have 2 bikes that have been sitting for over 2 years. Very dirty and dead batteries.

The Gold Wing also has a water leak that will be fixed here shortly. I put the battery charger on it last night, hopefully one out two batteries will still hold a charge. It's the newest of the 2 so I have my fingers crossed.

It weights to much to push it onto a trailer to take to my buddies shop. It needs to run! 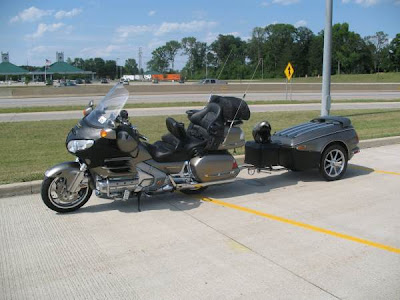 Then we will be headed to the tire shop and then an inspection. Renew the tag and it will be back in action!

No that's not my bike but damn close! If mine was beside this one you would think they are identical, no kidding! Same color trailer cooler everything except the bra on the front and I only have one antenna!

The trailer is the bomb! Air ride and 200 pounds capacity, believe me you can put a lot of stuff in that trailer. The wife and I have taken trips in the past and she brought EVERYTHING!!!!!!!