It just keeps getting better! Last week was the first race of the summer series and my boys did great. Made me a proud dad, this week we went and they did better! Oh yea, guess what, I am a proud papa!! Heard that before haven't ya.

So anyhow Chase has really taken a liking to his bike this year. Outta the blue, I really didn't see this coming. He hasn't ridin hardly at all this winter and hasn't really seemed interested. Then out of nowhere he decides he wants to race the summer series and damn, 2 weeks in a row he has a medal around his neck! 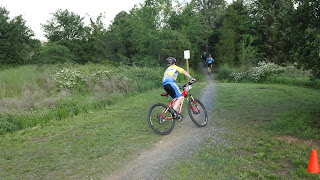 Yep, he went out, and came up the hill in 3rd place and by the end of the race he was sitting in 2nd place!! Now Chase has never been that competitive, he raced before but he just road around more than he raced then. For him to overtake another rider and push himself hard enough to make it stick is a big improvement for him! Now he is saying we have to make all the races and he needs to ride a little more. 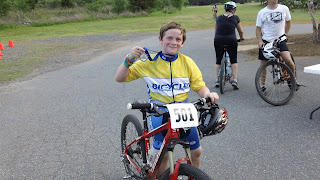 That is one big smile right there. You are looking at one proud kid, and that makes me proud. I should have taken a picture of him with his other buddies. They where all talking about the race afterword. 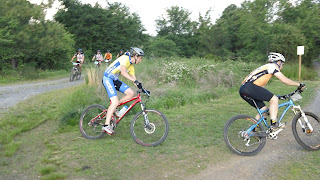 Next we have Cody, now he is about the same as his brother. Hasn't raced in forever and not much training, then last week he shows up and gets 2nd place. This week he trained a little bit and then went racing. The results where 1st place. That's my boy, with Cody this is the usual. He has been racing for 4 years now and is more than capable of racing up front. He knows the deal and how to make it happen. As you can see in the photo he was in 2nd here at the start. He and the other guy had already gaped the rest of the field by 25 yards at the top of the start climb. He had about 25 guys in his race. Cody sat on the back wheel of this guy for the majority of the race and then made his move toward the end of the race. That's called strategy, he knows how to use it. Chase is learning and will catch on. It's all part of growing up at the bike races. I can think of worse places to grow up. 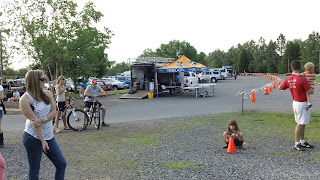 They had a good crowd last night. You wouldn't think you would have a 100 people show up for a race series in the middle of the week. This shot is of the sign up area right after everybody had when down the hill for the start. Neil (the promoter) does a good job of setting up a professional race venue. Every week he goes all out..............
Posted by ritchie at 10:28 AM