What was that all about? Monday night we went to bed with the windows open, knowing we had a storm coming. The weatherman said there would be high winds, who pays them any attention. I sure didn't and about 2 am all hell broke lose! I was awaken by the thunder and lighting and it literally sounded like a million rocks hitting the side of my house. I got up and shut all the windows and watched out the window for a few minutes, then went back to bed.


75,000 still without power after storms

I swear that was the strongest I have ever seen the wind blow, as you can see from the head line Charlotte got hammered. I heard one time yesterday that they had like 75 roads blocked in the Charlotte area. 485 was closed, hwy 51 in Pineville was closed. They had a mess in town. 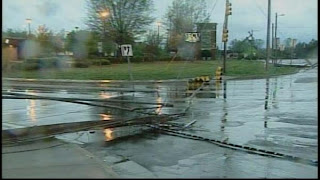 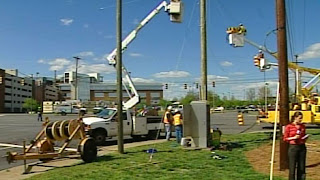 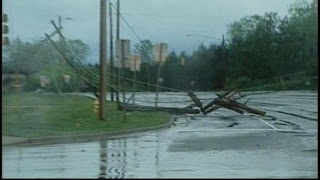 As you can see by the photos it was terrible and people still don't have power. It ain't even hurricane season yet. I hope this isn't a sign of the hurricane season. We haven't had a bad storm with high winds like that in a long time. One of the guys I work with comes all the way from Lancaster SC, it took him like 3 hours to get to work. As the headline above reads 75000 still on Wednesday morning still don't have power!

Then I went home last night and inspected my own house, I had a mess also. I found the lid to one of my trash cans in the bottom of the swimming pool. The roofing, it blew off the roof of my shed, found it on the other side of my house! I fixed that, the summer I spent roofing pays off once and awhile!
Now for my house! I have vinyl siding and all the boxing is wrapped in metal (or was). I lost about 10ft of fascia on one end, and about 20ft on the other. On the one end of my house the peak is about 45ft in the air. I am not climbing up to fix that. I got people coming. That's right I got people. It's nice to be in the biz once and awhile. I know who to call.
Then we have my box trailer over beside the garage. This thing weights 3000 pounds by itself with nothing in it! Believe it or not the wind was so strong it pushed the trailer off the blocks, the front was almost into the front bumper of my red truck. The kicker to all this is after I shut all the windows I went back to sleep..... See ya...........................
Posted by ritchie at 9:35 AM