OK I came across this Friday, I thought it was pretty neat. This guy bought this 1930 Model A Ford car on craigslist with the goal of driving it everyday for a year. His name is Jonathon Klinger and lives in Michigan. 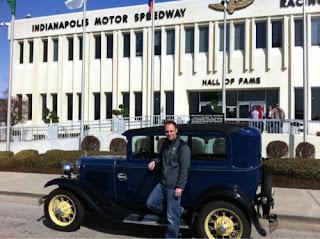 His reason behind this you ask, because not everything a person owns should contain a computer! I like that and agree with him, does everything have to have a brain. Whats wrong with people that they think everything has to be smarter than they are. Are we as a society so stupid we can't think for ourselves. 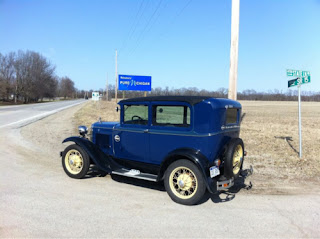 Not a bad looking car either he bought it from an older couple and it hasn't been restored yet. Of course you wouldn't want one that had been redone anyway. Yes he has had a few problems with it over the last few months, but he and you and I could fix it if we had to. Now you open the hood a car and can't even see the motor. The last thing you he or I could do would be fix it. 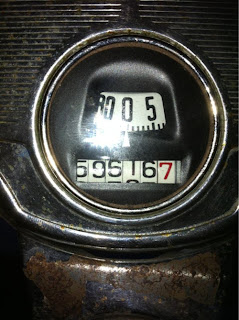 How do you like the gas gauge , the tank holds 8 gallons. Now here are some interesting facts about this car from 1930. Top speed is about 62mph. He gets about 19miles to the gallon if he keeps it around 40-50mph. The car is the happiest at that speed. He stays of the interstates and uses the back roads. He goes down to his parents house 400 miles away regularly, takes him 12hours. Might not impress you but it does me. 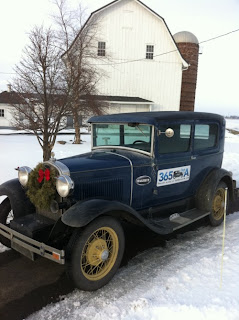 If you reference some of my older blog, I have talked about my 2000 S-10 truck. It has a little four cylinder and doesn't like the interstate either. So I can relate to some of his driving techniques , I stay on the secondary roads as much as possible and my truck is happiest riding along at about 55 anything over that and the motor sounds like it is about to fly apart!!

Jonathon's website is "365daysofa.com"  If you want a trip back in time stop by his site and check it out. I enjoyed it and will be checking back in every so often.

It wouldn't hurt for everybody to take a few months of their lives and lower their standards for a short period of time and drive an older junk car. People come flying up behind me all the time and ride my ass like I am keeping them from something. Every morning I take my son to school, at least 3 out of 5 days a week I get passed. The speed limit is 45 and I will being doing the speed limit yet people fly be me like I am the problem. Yet we get to the stop light 8 miles further up the road and I am usually e few cars behind them.......