Today I had people who read my blog ask me about the post from yesterday. You know what the number one question was ? It really got 19mpg. Yea that's what it gets; not what it got. Of all the little facts I put in the story yesterday that is the one fact people seem to notice the most.

I don't think they had ever given any thought to the mileage a car would have gotten in 1930. They just think that because of technology, the cars of today must get twice as much mileage than cars of old.

They do in Europe, but here we as a society think it is our god given right to drive the biggest damn car we think we can afford. We think we are supposed to drive 30 miles each direction to work and god forbid somebody mention carpooling!!

That is enough about us and our stupidity. Lets get back to the Model A. As I said I would love to do what he is doing. It brings back a few memories for me. I used to have a 1979 Honda Civic, I paid 1000 for it drove it for 2 years before i sold it for more than I paid for it. It needed a paint job and the motor was so worn out that if you drove it to the beach you had to stop about half way. Once you stopped you would have to take the distributor cap off and set the points again, you had to reset them about every 150 miles. I carried a pack of matches just for this purpose.

I could fill it up for about ten dollars and drive it for 300 miles before I had to fill it up again. Granted gas was only 95 cents a gallon. So now that gas is almost 4 dollars a gallon you think people would be all over cars like that. No, not here. We just sit around and bitch about the gas prices. 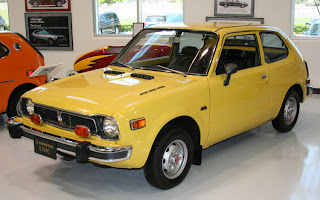