Ok, I got the pictures now! As I have already mentioned last weekend Karen took Chase and her mom out to Kinston for my little nephew's birthday party, Wriston. He is now 4. They had his party at a chick-fil-a restaurant with about 15 kids there.
Chase was standing on his knees for this picture. Yes he still loves to play in the jungle gym, that's what you hate about them growing up. He had a ball at the party and played on all the toys. If he was with kids his own age he would never have gotten on the toys. 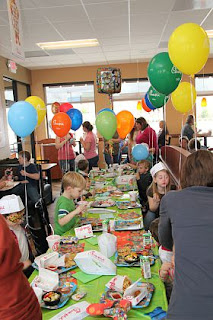 I miss the days when we had kids this small , we used to have parties at the restaurants and set up the table like they did. The boys used to get so excited when we would have their party and all there friends would come. I wish I had audio for this pic. you know it was loud!!!!! 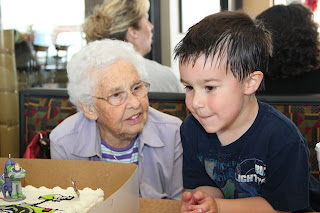 Wriston even had his great-grandma there you know the noise was about to drive her crazy. Look how wet the kid was. He was having a ball!! Believe me this kid is wide open!!!!!! On your birthday your allowed to run and gun like a wild man....
Of all the kids he invited , he only invited 1 little girl. His girlfriend, that is as cute as it gets. He didn't want any other girls there. 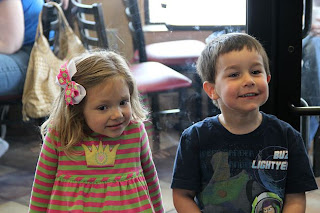 That's them, the man of the hour and his "girlfriend"...Now with a name like Wriston what do you think his girlfriends name would be. It sure ain't a normal name that's for sure...So we proudly present to you Wriston and Joegina!!! Don't they make a cute little couple.. My wife said she is a very shy little girl , very quiet. Opposites attract... 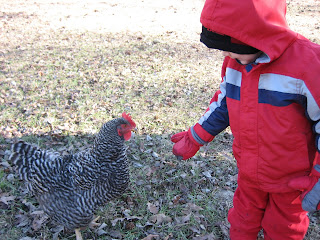 So anyhow I kinda hate I missed the party. I like my little buddy he is really smart for his age and fun to be around and to top it off he is already a chicken farmer!!! This is a pic of him with his favorite show chicken Rita..God rest her soul, a fox ate her a few weeks ago and he still talks about her. He and his chicken farming momma had taken her to the state fair to show! If you ask him about Smitty ( that was another chicken they had) He will say stupid chicken! He didn't like Smitty. Smitty didn't like Wriston and would try to flog him every time he was around..So they made chicken and dumplings out him...That's funny!!!!!
Posted by ritchie at 2:35 PM