Usually the day after I have went home and did absolutely nothing and laid around all evening  and  basically was worthless. Yes I am guilty of that, not proud of it but I have my days. That's when I get on here and just freestyle. "Freestyle" I like that word I got it off that the show "Pickers" that's what they call it when they have nowhere to go and just look for junk in peoples back yards. I guess when I "freestyle" I am looking through the junk in my brain trying to comment on anything that comes across my little mind.

How about this for starters, when I was younger I used to go to all the races at Charlotte Motor Speedway. Now I won't go near that side of town on race week, are you kidding me it is a zoo. Nascar lost me when they got all politically correct, and all the drivers started coming out or the same factory. They all act the same , none have any personality. Or if they do they aren't allowed to show it. The cars all look alike now and it just seems too manufactured, if that makes sense. 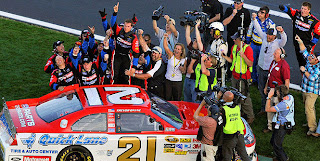 Then along comes this kid, for one of the legendary teams. Woods Brothers. One you never hear of anymore because they are small now, they never merged with any of the big teams. Or you could say sold out to any big teams. Nascar has only 3 teams that are power houses anymore, last year the 3 combined, won like 75% of the races. If they ever asked my opinion on why the TV ratings suck I would tell ya that's the reason. No personality among the drivers. 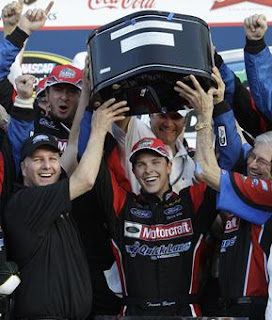 So now we have Trevor Bayne, 20 years old and a high school dropout. He quit school to pursue racing. That won't get his parents any awards, not in this day and time. But it is paying off that's for sure, he just got a check for about 1.7 million dollars after his win in the Daytona 500. That is about the only race I watch anymore. He is only gonna race like half the cup races this year because his Woods Brothers team only has the money to race that many. At least he is young enough that we still have a chance he can keep his own personality.

So anyhow that's about it for my "freestyle" writing today. I had nothing in my head and this is what I ended up writing about. I am not a big race fan but for a few hours Sunday they had my attention. When the kid races again I might tune in to watch it. 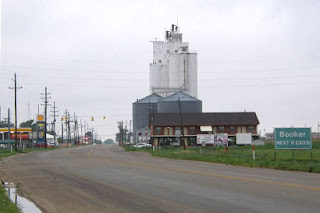