Ok finally got a post up today (wed) It's been a hell of a couple of days. When it rains, it pours!! So it's been raining in my life for the last 3 days!

As in my other post, you saw the pictures of the car. We hit a deer Saturday night, had to go to court again on Monday and the septic tank decided it was time to quit working. As far as the septic tank, it works again got it going real fast. Hard to live without that. I left the camera in the house for that operation. Just didn't really think anybody would like to see those pictures!!LOL...Take my word for it, we had it fixed...

Next I had court Monday and again if you reference the post from two weeks ago you will know what a joke I think the court system is. Monday was just a reminder of my feelings. It was a total waste of my time, because I had my back to the punks who threw the drink at me I couldn't say which one did it. So they dropped the charges. They both admitted being there but neither one of them would say who threw the drink. I may not be a rocket scientist but that just doesn't seem right. They are both guilty plan and simple, but no they just throw it out of court. What a total waste of tax money all those people up at the court house getting paid from my taxes and can't even get this done right.

So if you are a bicyclist and get run over or hit by flying objects thrown from cars. Tough shit!!!! Just deal with it and move on. Even if you find out who did it doesn't matter. That's the way it works...........

So maybe we turned a corner yesterday. I have a friend of mine fixing my little truck so I really didn't want to bug him for the truck. Even if I was down to 1 vehicle. I called yesterday to check on truck and he said yea it's ready come get it, that worked out. Last night we took the car to the body shop and went to pickup the truck. So back to 2 cars. Should have the van the first of next week.

We did have Valentine's day on Monday, Karen got a lot of chocolate and cards and she really made me happy. Checkout the picture of my new shop clock. A bicycle wheel, how cool is that.. I have needed a clock in the garage every since we had it built. Now I got one!!! Even pumped up the tire before I hung it on the wall..........Yea I can be a redneck!!!!!!!! 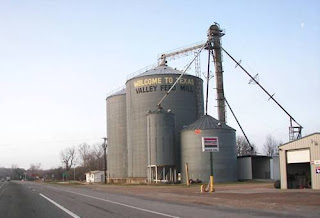 One last shot for the day. Seems like I don't have many pictures today. So I wanted to add this one, we are back to one of my favorites again.. Grain Towers....Texas style......McKinney I think
Posted by ritchie at 9:35 AM