Ok now that all the snow is gone I want more snow..Yep that's right I changed my mind..now it's just wet and muddy , I would rather have the snow than mud..And still cold so why not have cold and snow.. 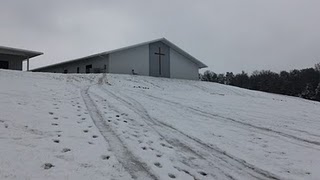 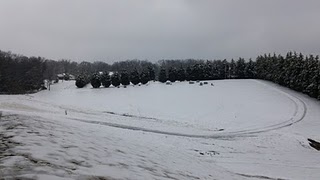 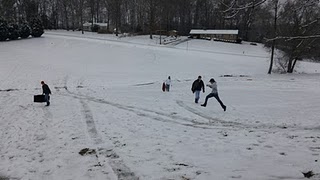 I finally figured out how to get pics over here from my bloggie , still working on the video end of it..These pics are from the other day at our favorite sled hill..That's the church on the road behind our house..These are from the bloggie..I have to re size the pics to get them to load..One thing about starting this blog I have learned more about how to use a computer in the last month than I ever knew before..Believe it or not where I work it takes along time before technology creeps in the door..I work with people who only started using e-mail  in the last year..They fought it as long as possible..So because of that I have never had to really learn how to use it..That used to drive my dad crazy..Every time I would lockup the home computer and call him , after about ten minutes of him trying to tell me how to fix it over the phone he would get frustrated and just tell me to pull the plug out of the wall..LOL..That usually worked too..Wished I could still bug him though..He would have been impressed with my blog..Just the fact that I can type..

Didn't do much yesterday kinda had a lazy day..I guess it was just hump day blues , came home hung out with the wife and kids all of us in the same room for an extended period of time is unusual..The oldest is 15 all he has on his mind are the girls , and talking to them , so for him to hang out with us is something to take note of..The 10 yr old loves the x-box and he was even there without fighting with his brother..Weird..

Also (in reference to the motorcycle pics) I found out that my buddy found the pics on a web site about bike week and just copied them..So if you have seen them before you know why..I thought I had something original..Wrong , still made you laugh though.. 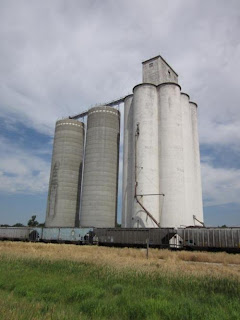 Well anyhow i am tired of trucks now so I decided we are going to switch to grain towers for awhile ..And yes most all of my pics are from Kansas.. 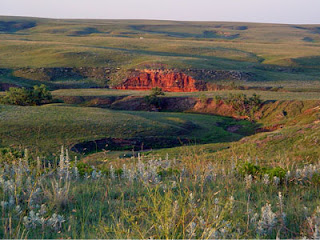 Also this pic is from the area around Ashland KS , typical of the land scape in the area......Later...
Posted by ritchie at 1:08 PM