Ok finally found out how much my Pugsley bicycle would cost 1500.00..i knew it would be around that price but was hoping it would be cheaper..No such luck..I did find one on e-bay for a 1000.00..Now I need to find somebody really broke and ready to sell.. 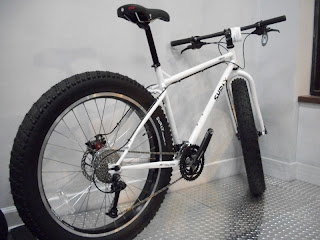 You got to agree that looks like a fun bike..I would ride it..It would work great over at Uawharie National Forest..My friends would think I am crazy , but I out grew pier pressure years ago..You either lead or follow..I like to be the leader..And the sooner in life you figure that out the better your life will turn out..That is my "word's of wisdom" for the day.. 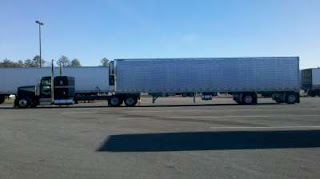 Next subject..Back to the trucks , I put this truck pic on here a few days ago..Different angle..Now check out the side angle..That would be a large pain in the ass to back in some of the places I have had the pleasure of going in the course of my travels..I still like it though , but he ain't running around New York city I can promise you that..While I am on the subject of trucks , yesterday went by my neighbors trucking company..Yes I live next door to a trucking company..Best neighbors I have ever had..Hung out for awhile and listened to the dispatcher giving out loads and damn how quick you forget the bad parts of a job..If I had to truck like those guys do I would drop over dead!! All I remember are the easy loads..Not the multiple drops and making the delivery times..Oh well I am a lumber salesman now..Actually I am a broke lumber salesman..But not broke enough to drive a truck..
Oh well back to the weather now..It is still cold very cold..Maybe next week it will finally warm up..Then we can pedal again..The snow is about gone now but the ice isn't..
Since I am all over the place with this post how about we go back to bicycles..Surly the company that makes my Pugsley also makes this one here..The name is spot on for me , "The Big Dummy" No shit that is the name..It is the perfect bike for running errands you could haul a lot of grub on it ..And go to the mall..maybe next year..Right now I am working on the Pugsley.. 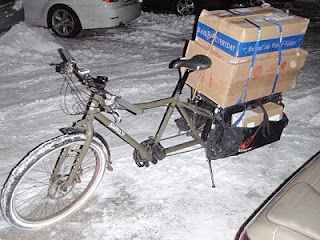 Also today I found out I am a trend setter..There is a guy in New York who writes a blog everyday and does a column for Bicycling magazine..And guess what he had a picture of and was talking about today..Hold onto your hat folks , he had a picture of his new Brooks Saddle..Says he has never had one before either..The only difference between his and mine..He got his for free , I got mine for Christmas..I can't wait tell I start getting free crap in the mail just so I will talk about it..And yes the pic of the Big Dummy is his bike after he went to the post office to pick up mail..As you can see he lives in New York and it snows there so much people are used to it..Not like here..They even still commute by bike in the snow..
That is also called a long frame bike..See ya later................
Posted by ritchie at 3:49 PM