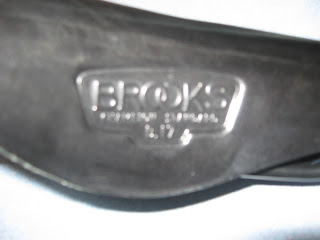 Yea that's right got here today the Brooks Seat .......Sweet ain't it..It showed up today..Got the call and made the stop.. 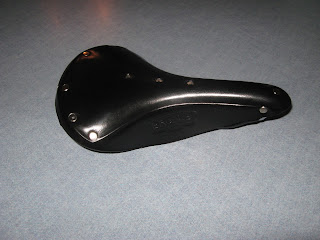 My wife says I have finally crossed the line , into the world of complete bike geek status..But she just doesn't understand the whole thought process behind my madness..No you can't ever have to many bikes and they make 10 million parts and accessories.You are never completely hooked up..
Now back to the seat..This is the legendary Brooks Saddle , it has been in production since 1886..Before the car was even thought about..That's right it is a classic..It doesn't get anymore cool than that , at least in my world..And if you don't realize it yet your are living in my world , it revolves around me..LOL..So anyhow put the seat on my touring bike as soon as I got home , rode around the yard and drank a few beers admiring the work of the English..Yea it's still cold here and I had to pick-up the kid from drivers-ed so I had a whole list of reasons why I didn't go ride ..I can be a wimp sometimes..
Yep on top of my mountain bike and road bike I also have a touring bike I bought last fall , I have some big plans for it..In the spring I am going to load it up and try bicycle touring , first trip will be toward the coast ..That is only a few hundred miles so I think I will take a few days off and have the wife and kids meat me out there..I already have the bags and racks for it and a tent , have a sleeping bag but I haven't decided if it is the right one yet..Oh well my goal is to do a cross country ride on the transamerica route sometime in the future..So that is why I had to have a seat straight from England..I like my seat if ya can't tell yet.. 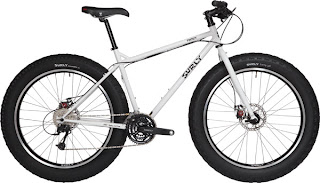 This is called a "Pugsley" it is made by Surly Bicycle Company..And it is the latest  bicycle I would like to add to my collection..Checkout the tires they are the biggest I have ever seen on a bicycle it is made to go on the beach, mud, snow, thick leaves..Basically every where..That's cool..If you go on youtube there are some cool videos of this bike in action..I wasted a lot of time there this morning..To give ya an ideal of how fat those tires are the wheels are only 24in..That's a lot of rubber..I haven't found the price yet but I haven't looked to hard yet either..Anyhow I want one...This is the kind of bike you would go explore power lines and motorcycle trails with..The tires are big enough to smooth out about anything..
So is anybody playing the Mega Millions game..That's all I have heard around the office today , what would I do scenarios..oh well it's fun to dream , I got me a ticket...And yea I would quit my job in a skinny minute..Anybody tells you different they are lying....
And for the truck of the day I have chosen a big bad blue Pete..Next weekend I will stop down in Wingate and get a pic of a nice truck I found over the weekend..Put it on the here..It was sweet..
Posted by ritchie at 2:26 PM