Yep we made it again , time for the reward..The weekend , you only have 48 hours so don't waste it..The weather is going to be nice from what I have seen and not to cold..Actually it's gonna be like normal for the next 10 days..Yes we have rain coming next week but the temp is gonna be back in the 50's..With sat. and sun. in the low 60's..Already have a road ride planned for sat. , not sure yet on sun... 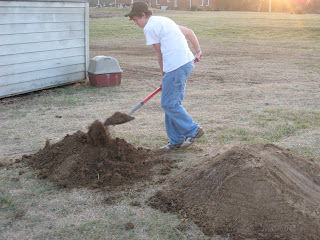 The kid wants to work on his jumps we are building in the yard..I know everybody has these built in their back yard so if you have any tips let me know..The yard is on a small angle so it is perfect for downhill jumps we plan to have them all the way around to the backside of the pool.. 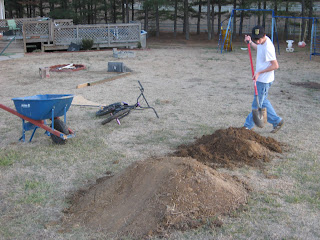 I have a friend with a dump truck we are going to barrow..So I can get a few loads of dirt and my next door neighbor has a bobcat so we can move it around..Cody seems to think we will need at least 4-5 truck loads..Good thing we are in the country..I can dump the dirt behind the out buildings and go from there..Why not we are never gonna move anyway..The kids would have a stroke if we left Unionville..

So anyhow it's a good thing we have friends with equipment capable of moving mass quantities of dirt..That shovel just won't fit my hands and I can't even see the wheel barrow in the picture..I do see the swing set , it is coming down this weekend..Kids out grew it a few years back..Now don't think I am one of those neighbors that bums stuff all the time , if they need a combine they know who to call..We can provide them with the tractor and driver no problem..Like the pics!!!!! 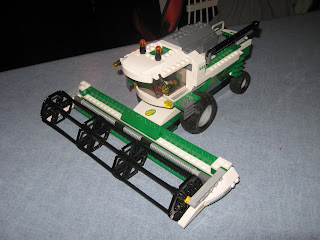 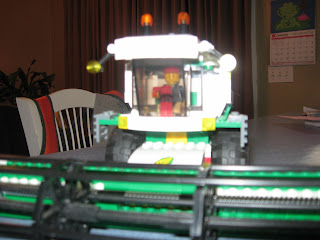 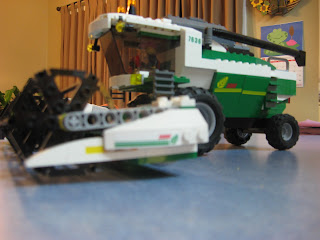 We were at the Lego store awhile back (around my birthday) and I saw this..Being from the west and loving the big tractors and trucks I couldn't resist..Can't claim you love Kansas without having a combine of your own..Don't ya like the driver complete with a cup of coffee..Yes I still like Lego's if you are a guy and say you don't you are lying , or you don't have access to them..Luckily my kids have a ton of them and are part of the Lego club..At least Chase is..I was kinda mad when Chase wanted to put it together but what do you say..LOL..Yea I wanted to build it..He did a great job though!!!!I got over my whining pretty quick , seeing how proud he was when he was finished.. 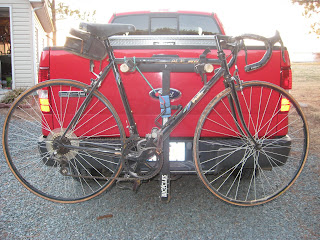 As you can see from the pics above I now have another classic road bike to restore..One of my customers at work has had this one hanging in his barn for 15 years..It hasn't seen the light of day in that amount of time..He knows I ride and heard me talk about restoring an old mountain bike I have , so he brought me this one..So now I have 4 classic bicycles to work on..Although I won't start on this one for a few months at least I have the next project lined up..Is It worth anything? Nope..Is it fun to bring these old bikes back to life? You bet....As I do this one I will document it from start to finish so you can see the outcome..

Also you can see didn't really have a topic this morning so I just kinda went with what I had pics of..The kids and I staged the shots of the tractor on the kitchen counter and I stood around and watched Cody dig dirt..It was tough taking the pics,,made me kinda of tired watching him work...Had the bike to unload so shot a pic of it..So nothing fancy today.. 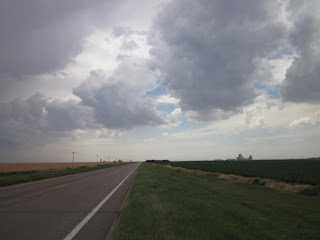