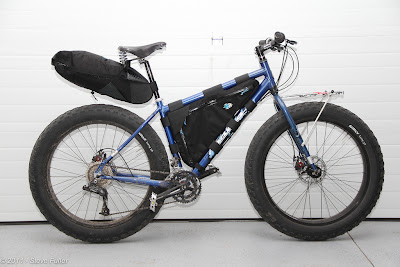 For me, yes ! Why would I want one of these. It's called a snow bike , and no we didn't even get snow this year!

But we have sand ! Lots of it on the coast ! The Outer Banks would be perfect for this ! How often would I get the chance to take it out there , not often enough ! But it would be fun!

Last year Karen and I went out there for our anniversary and slept on the beach for a week . I swear that was the best 5 days vacation I have ever had !

I think it would be great to drive out to the coast and take the bike over on the ferry and then ride to the other end of the island and pitch a tent !

South Core Banks , the island is 27 miles long , take all my stuff and head to the other end . Pitch a tent some where along the way and sleep under the stars !

Will it ever happen ? Probably not , that's a lot of money to spend on a bike to use maybe once a year .