Finally, I had a few partners for the ride last night. Chase had said he wanted to ride last, night but I wasn't gonna hold him to it if he decided he didn't want to go. So I got home and asked and he still wanted to go. As we where getting ready Cody started getting his stuff together. That kinda surprised me, he hasn't wanted to ride in awhile. 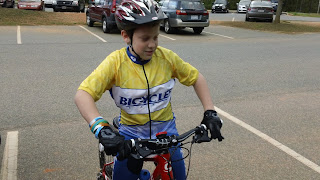 So we loaded up and went to Beatty park. Had a great time, I ride with Chase when it is just us and Cody takes off. We see him at the truck when we are done. The trail was in great shape, the best I have seen it in a while. The temperature was great and we had fun. The picture above was in the parking lot. We were just about to head out, I was trying to get both in a picture together. That didn't work Cody would be on one side of the truck and Chase on the other. No matter when I tried to get the shot. 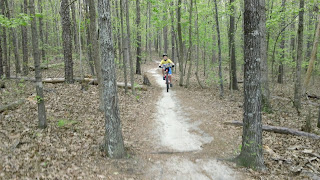 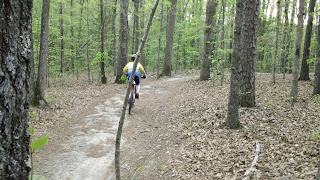 These shots are of Chase coming down the trail and then going by, don't worry I caught him! We had a good time, the kids seemed to have fun and we spent an evening in the park. Don't get much better than that.

So tonight it's back to reality, the yard needs mowed. I am the lucky one. Hopefully I can get done early enough I can at least ride to town for the hell of it. 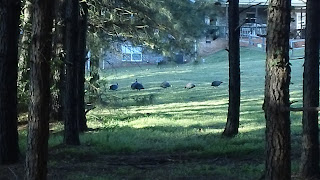 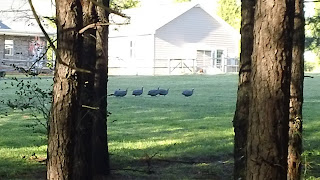 I leave you with this shot today. The other night I had this flock of guinea's come down the driveway. You would not believe how loud they are, when I tried to get them on camera they went through the woods. I went up in the woods and got a shot of them in my neighbors back yard. That was as close as I could get before they ran up the hill. I like living in the country..............
Posted by ritchie at 10:56 AM