Yep, I am a proud papa! The Charlotte mountain bike summer series kicked off last night at Francis Beatty Park. Chase has been saying for awhile now he wanted to race and Cody hasn't said much about it. It started and they raced.


Yesterday a.m. I woke Cody up to see if he was even gonna come and he said yes. So I loaded up all of our stuff and grandma brought them to work at 4oclock. On the way Cody decides he is gonna race, Chase was the reason we were going and I guess that's what it took to get Cody motivated again!
I went and rode, but didn't race. It did give me the fever, I think I am gonna hit it next week. It was great being back at the races. I helped mark the course and just hung around and took pictures. Of course I was cheering and having a good time!
This was the start of both of their races. You come across the dam and head into the woods, I was at the entrance to the woods.Chase was in 3rd at start and stayed there the whole race, he had about 10 kids in his class. Cody started in 2nd and droped back to a strong 3rd. He had about 25 in his class.

Couple of action shots of the kids during the race. Various locations in the woods. One of these days I am going to get a good camera and learn how to use it! Until then this is what you get! 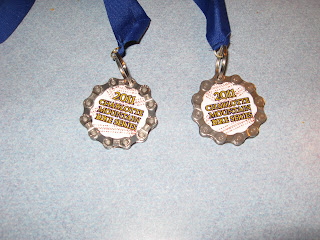