One of the kids wants to race this year. Chase has came to the rescue, Cody is still on the fence but at least one wants to go. We had a talk about it last night. Out of the blue he asks, when we are gonna start racing. Caught me off guard. So now he wants to ride this weekend. Cody has soccer and Chase is the perfect age to get back to racing. He is gonna rule the juniors class.

So yesterday my title was Play Nice. So I am . I decided to see if I could make a friend off the web site. I have an extra bike frame laying in the garage so I thought I would build it up into a single speed. I need parts and somebody who knows what to buy. I got like 5 responses. Already got a phone number to call. I am kinda impressed! See my advice is already paying off. I need to listen to the little voices in my head more often!! Everybody has the voices, I am just the only one who will admit it.. LOL..

Finally:::Its Friday:::It's the weekend:::One of the kids wants to race:::And I am being nice...I hope the karma gods are watching. Maybe I can finally hit that lottery I talk about sometimes.

I have a back up plan, work on Monday! Now for a new subject, see that picture that has got to be the dumbest dude you have ever laid your eyes on! His name is Riccardo Ricco,he is a pro bicyclist. Or maybe I should say he was a pro cyclist. This guy won a couple of stages in the Tour de France in 2008, and failed a drug test during the race and was kicked out of the race and suspended for 2 years. Well this year he is finally able to race again and was picked up by a pro team and would have been in the tour this year.

The head line says it all. Saturday he passed out and was rushed to the hospital, he was running a fever of 105degrees and his kidneys shut down. Perfect health Friday and Saturday he is in intensive care about to die. As the newspaper headline reads he had a blood transfusion and it went wrong. While he was storing the blood he managed to let it get to warm, so the cells started breaking down. Then he gave it to himself and that's when all hell broke loose inside his body.

Are you kidding me. Sometimes it's nice to be married to a nurse she tells me all the details that they don't put in the paper. Do you want to win so badly that you will risk your life!! That is crazy, the damage he has done to his body is insane!!!!!!

So anyhow I have a riding partner for the weekend and Karen and I are doing a charity walk in the morning. Don't know what the weather is gonna bring and don't really care. My new approach to the weather is that it is gonna have to work around me. I am tired of working around it. 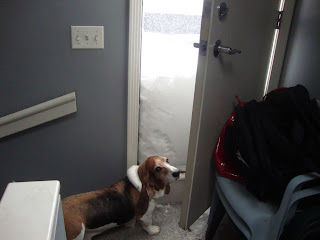 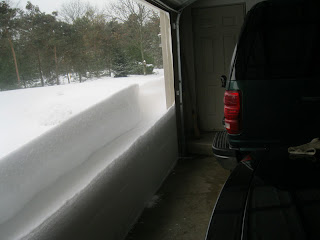 For the pictures of the day we have a dog that is about to pee in the floor and a person who is gonna be late for work.........Got to smile about something!!
Posted by ritchie at 10:37 AM