That about sums up the weekend. Gettin around, ridin and playing hard. Have I made mention that the Wendy's restaurant up the street from where I work burned down last week. It was full of people and a cop rode by and saw the flames coming out of the roof and went in and got everybody out! Gives the spicy chicken a whole new meaning!!! I know that ain't very funny but at least nobody got hurt. They say it started in the vent for the grill. 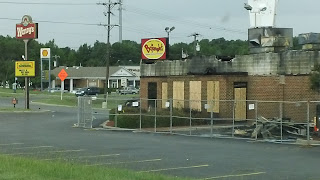 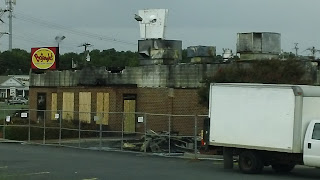 That place has been there for as long as I have been in North Carolina. Now I have to find a new dollar menu. I know they will rebuild it just not sure when?

Saturday I had planned to take Chase to Poplar tent and ride but he didn't want to go there, said it would be to hard. He hasn't ridden a lot lately so I didn't want to push it. I want him to enjoy it, not suffer. So we went to the Sherman greenway. He did good and had fun so I would consider that a success! He has piano today so it will probably be tomorrow before I get him out and on the trail again. Poor old Cody had the longest weekend of his life, he can't ride run anything.


Sunday I hit the road and arrived at Poplar for a ride by myself. I am gonna miss that place, When you ride there you are riding a real mtn bike trail. Not a greenway!!!! report tomorrow......
Posted by ritchie at 10:55 AM