If you read this blog very often you have heard me talk about my buddy Kelly. We have been riding for 20 years together and friends just as long. If you know me, I am very competitive and so is he. When we ride together it ain't just a "ride", our rides involve a lot of trash talk! Most people wouldn't understand this, most "friends" slow down and enjoy a ride in the woods.

Don't get me wrong he and I enjoy our rides together, we just do it a different way. It's called push, we push each other till we are ready to puke and then the trash talk kicks into high gear! There are times when we come out of the woods side cramping and doubled over in pain! But with a smile a mile wide! Sometimes he makes me mad as hell with his mouth and sometimes I know I piss him off just as bad.

As I said I wouldn't change riding partners for anything, and I hope somebody can relate to having a partner who can push you just as hard! Now for the start of my day! I came in this morning and found out his plane has crashed! Yep he is a pilot and he wasn't flying it. Thank god everybody who was on the plane is OK. They landed and the brakes failed on the plane, they slid off the end of the runway. Everybody had a few minor injuries, from what I understand one of the pilots had a broken arm, that was the worst part. 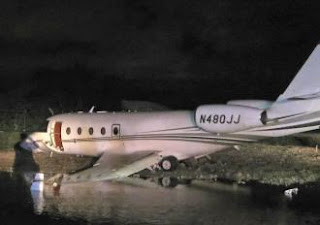 As you can see the plane is pretty much totalled! I don't know much about planes but that one looks like it won't be flying anymore!

I called his wife to find out if he was alright. That's how I found out he wasn't flying it! Again thank god everybody is fine. But damn he scared the shit out of me. I look forward to the next ride that's for sure!!!
Posted by ritchie at 9:52 AM