By myself! My buddies all cancelled, and I was on my own! First time I have been in the woods at night by myself. That was weird, I think I ran into about 20 trees, I was looking over my shoulder. I swear you pedal faster when you are out with nobody around.


I went to Francis Beatty park and did 2 laps. when I started it was still daylight, although dark was fast approaching. At that time of the day it is starting to get dark in the woods, so about 4 miles in it was. Most of the way around the park you can hear them at the soccer field and basket ball courts. But when you get down in the bottom behind the dam it gets real dark. 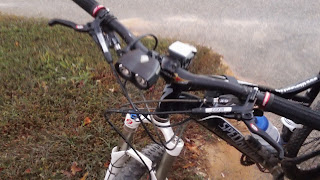 I had the bar lights and a helmet light so I had plenty of light. With the helmet light you have the battery in the back of your jersey. At one point the power cord came unhooked and I was standing there trying to get it hooked back up. I was sitting in the middle of the woods wishing I had brought a flash light, fiddling around in the dark when it dawned on me I had the bar lights sitting right in front of me. I kinda felt a little stupid! I thought, damn I ain't to smart sometimes!
I will defiantly do it again, it wakes you up for sure! The only time I had the crap scared out of me was when a deer jumped up and took off through the woods. That sounded like a herd of buffalo, how they can run in the dark like that is amazing!
They have a group going to night if the rain holds off. If it is a go I am going, it would be neat to ride with a large group. The most I have ever ridin with was about 4-5 people. From what I understand they had about 10 people last Thursday. Stay tuned!!!!!!
One last thing! I have talked about the Great Divide mtn bike race a few times , how much fun it would be to do that race! Well you know what I might be to scared to do that! I thought I was a tough guy, but to be in the Rocky Mountains all by myself on the continental divide! My name ain't Crickett! Yep she is the friend of mine who has done that race for the last 2 years! She's just a little thing too!!!! But she's tougher than I am!!
Posted by ritchie at 8:50 AM