OK, as I have mentioned my wife had wanted a camper for a long time and all I ever said was we won't use it. Well I have to admit defeat, she might have been right on this one. We had a blast, the kids had fun we had fun and we are going back. 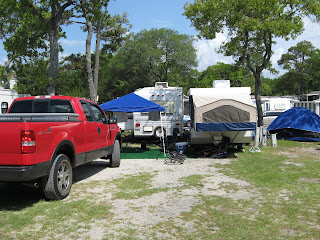 This was our set up for 3 days. We got down there Friday night about 11:00pm and got set-up, Saturday we rented a golf cart and had the camp ground for our play ground. We stayed at Apache Family Campground I stayed there when I was 10 years old. That was kinda neat to be back there after all these years, with my kids. They have the longest pier on the east coast and a restaurant game room a store and cable TV. Yea I bought a pop-up and we took the TV with us and had cable. That's what I call roughing it! 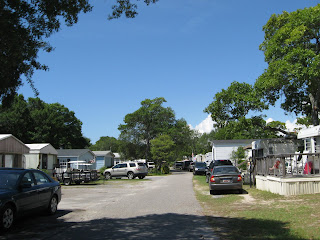 The place was packed and it still didn't seem crowded. Chase said everybody is so nice there he wants to go back. So do I, I think we are going to go in 2 more weeks. I learned a lot about this type of camping this weekend. For one it ain't the same as camping in the woods with nothing for entertainment. They had a live band Saturday night on the pier and karaoke on Sunday. 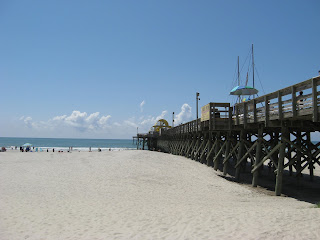 Speaking of the pier, check it out as I said it is the longest on the east coast at 1200 plus ft. Where you see that structure  toward the back of the picture is just the halfway point, I should have taken a better shot from the side but I didn't. Maybe next time. Tomorrow we will talk about the golf carts and permanent houses that people have in the camp ground.
Posted by ritchie at 11:18 AM