You know most people think a bike mechanic is just some guy who changes tires and adjusts brakes! My kid wants to be a "bike mechanic". I say go for it! His mom says no way, he is going to college! She thinks bike mechanic's change tires!

I say if he wants to go to school for this and learn, why not? He would have a job the rest of his life! A low stress job and an enjoyable job! Yes, I want him to go to school, but sometimes you can just tell. Cody is really laid back and I can see him taking some time between college and high school. If that would be the case why not let him go on to bike school and at least stay busy learning something! 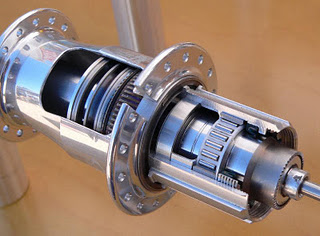 Besides does this hub look very easy to rebuild? I put these pictures in here to give you a new perspective of how complicated bicycles really are. Believe me most bike shops won't even work on the $100 dollar specials from Wal-Mart! Those are considered throw away bikes! If they last a year you got the good out of them.

How about this hub? It's an internal 3-speed hub. I don't know about you but I think I would want a bike mechanic from a bike mechanic school to work on this if it needed to be worked on! If Cody wants to learn how to repair things like this then so be it. It ain't rocket science but it ain't far from it. Especially when you get into the high dollar bikes. Most people don't realize there are bikes out there that sell for 10grand!