Yep I said deer, four legged deer. I might have talked about this before and if I have so be it. I am going to show you again and you can see it is bigger. Here at work which is in downtown Matthews we have a deer that lives right here on our property. Now when I say we are in downtown I am not lying. You can't even tell where Charlotte stops and Matthews begins! We just happen to be in a little valley with woods in the area. Right here in the middle of suburbia we have an Albino deer living here. 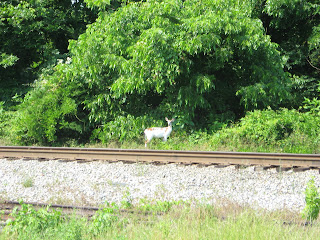 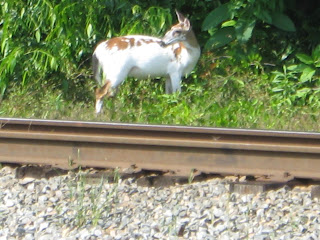 The thing has been living here for about 3 years now. It is about tame, you can walk up to it with in 15-16ft and she will just stand there and look at you. If you try to get any closer she will walk away but it is still neat to see it. I was at the back of our warehouse when she came out of the woods .

Now on to racing, checkout our new uniforms for this season! Pretty sharp aren't they, we got them last week, this was the first race in them. 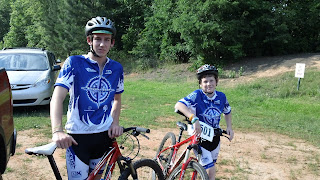 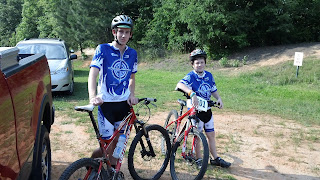 You realize how hard it is to get 2 kids to stand still long enough for pictures. It ain't easy, they act like they might get sick if they stand to close together for any length of time.


So to the race they both started out good Chase went into the woods leading and wearing his shades and Cody went in 2nd. Chase got sick and chunked his lunch about halfway through, he recovered and finished 2nd for another medal! He had about 10 kids in his class and is doing really well this year. For a long time all he did was go to the races and watch his brother race. Now he is big enough to race by himself and he loves it. I wasn't to fond of letting my 6 year old ride around 8 miles deep in the woods without me! Now he is 10 almost 11 and he knows whats up and what to do.

Now we get to Cody, he had a bad race this week . It started good and he was kicking right along and then he lost his chain. He had to stop and fix it, then get back on and go again. Only problem was he it a tree and crashed, by the time he got a good pace going he was all the back in 15th place. Well his races are only 8 miles so he didn't have a lot of time to get back to the front and found himself in 8th at the end of the race. To add salt to his wounds one of the bikes in front of him kicked up a rock and hit him in the eye. Now he has a black eye! 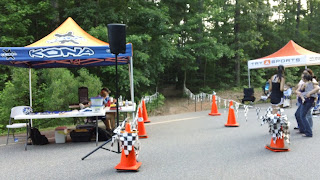 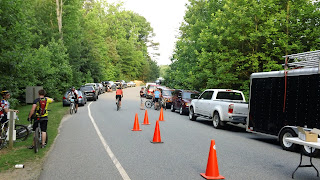 So that wraps up the race report for this week, we had a good turnout both sides of the road where covered in cars. We get probably 100 to 150 riders on a Wednesday night race! Not to bad.......
Posted by ritchie at 3:15 PM